Do you really need that?

I am just as guilty as the next guy when it comes to bringing too much stuff to a rendezvous, re-enactment or other historic event.  It seems we have so much cool stuff and so little opportunity to use it that it is easy to over pack in the hopes of getting to use our toys during our outings.

There are some modern items that we bring as well.  Medical necessities and cameras are the most common.  Some rendezvous even allow the use of propane stoves to cook on during a fire ban, rather than cancel their event or force the participants into having cold food during the entire event.

There is one item that I have been seeing way too much of and that is the cell phone.  They are everywhere in our daily life and it seems we have gotten so addicted to the damn things that we can’t put them down for a few minutes, let alone a weekend or week long event!  I am as guilty as the next guy about cell phone usage, however they are completely inappropriate for any and all historical re-enactment!

The past two years I have taken two wilderness trips for 5-7 days each.  During these trips, I have not had a cell phone or any coverage, if we would’ve had one.  None of us has missed it.  In fact it has been quite the opposite.  We have reveled in the fact that we were in the wilderness with only ourselves and each other to rely on.  What would we do in an emergency, you might ask?  Well, we would do just the same as our fathers and grandfathers would have done.  We would’ve handled it!

From this point on, I am committed to leaving as much modern stuff as I can behind, not to over pack my historically correct stuff, and to leave that God Damned cell phone in the car! 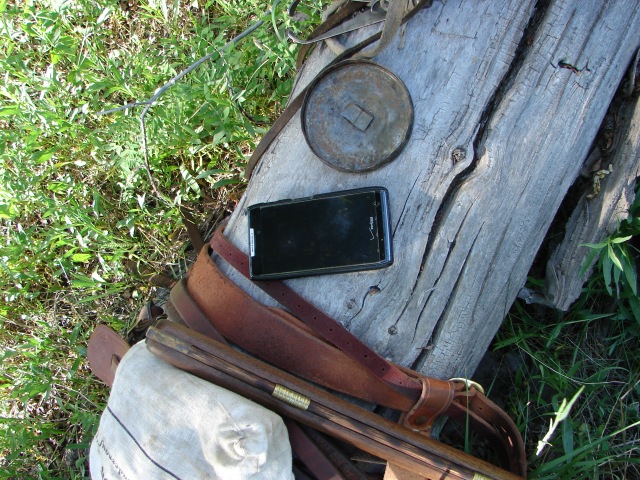 I am retired from public service, a trained gunsmith, pump mechanic, an old pipeliner, passable electrician, carpenter, truck driver, amateur blacksmith, proof reader, experienced hunter, shooter, reloader, avid canoeist, Renaissance man, jack of all trades, all around good guy (with the caveat: I won't be insulted, lied to or laid a hand on. I don't do these things to other people and I require the same from them.).
View all posts by Gabe the Shootist →
This entry was posted in American Mountain Men, Historical Clothing and Equipment, Miscellaneous, Pet Peeves & Other Rants! and tagged Cell phone, historical re-enactment, Historical trekking. Bookmark the permalink.