This .31 caliber handgun was one of the biggest sellers of all time for Colt. This one has been converted from percussion to .32 Smith & Wesson. It is a good shooter and works well. $550.00 + shipping. This is a black powder replica firearm that needs no FFL or other paperwork.

I am offering my 1847 replica for sale. It is .69 caliber or 14-gauge smooth bore and can be loaded with round ball or shot. This gun is a replica of the gun used by the U.S. Army in Mexico and the stored weapons were issued to the Irish Brigade during the American civil war. $850.00 + shipping.

This is a stock Lyman .54 caliber Plains Pistol. It is a very accurate pistol! $300 + shipping.

This is a replica of a French military pistol that was copied by Simeon North for use by the U.S. military. I have stamped U.S. on the side plate to represent this type. I converted it from its original flintlock to use percussion caps. This makes it a much better and more reliable handgun. It is .69 caliber or 14-gauge smooth bore. I have loaded it with a round ball or shot. $450.00 + shipping.

I am offering the Leman trade rifle I built a few years ago. It has a 32″ straight taper barrel with round bottom rifling. The lock has no half cock notch as the originals did not have one. Length of pull = 14″. $850.00 + shipping.

Swallows section of the Arkansas River

The last day of June 2020, Bruce Day, Bill & Lee Bailey, and myself set out upon the upper Arkansas river near the town of Florence, Colorado. We had Bruce’s Buffalo boat and Bill’s wooden pirogues. Bruce’s boat was constructed at the 2015 western territorial rendezvous. This boat is built on a frame of willow sticks. A ridge pole along the bottom center about 3″ in diameter with cross ribs of 1″ sticks bent and tied together to create the frame. Three raw buffalo hides were stretched over the frame, tied on and stitched together. Then the seams were sealed with pine tar which is a mixture of heated pine pitch and charcoal. We had to sew the hides twice and touch up the pine tar every day. 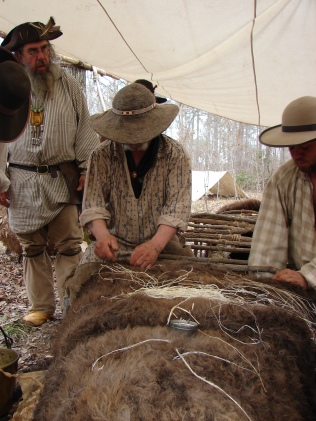 Bill’s craft consisted of a 12’ wooden boat with a smaller 6’ boat lashed to it as an outrigger. He built these a few years ago and used them on the Green river in Utah November 2017. The larger boat was used as a dingy behind his keelboat on his Missouri river trip in 2019. 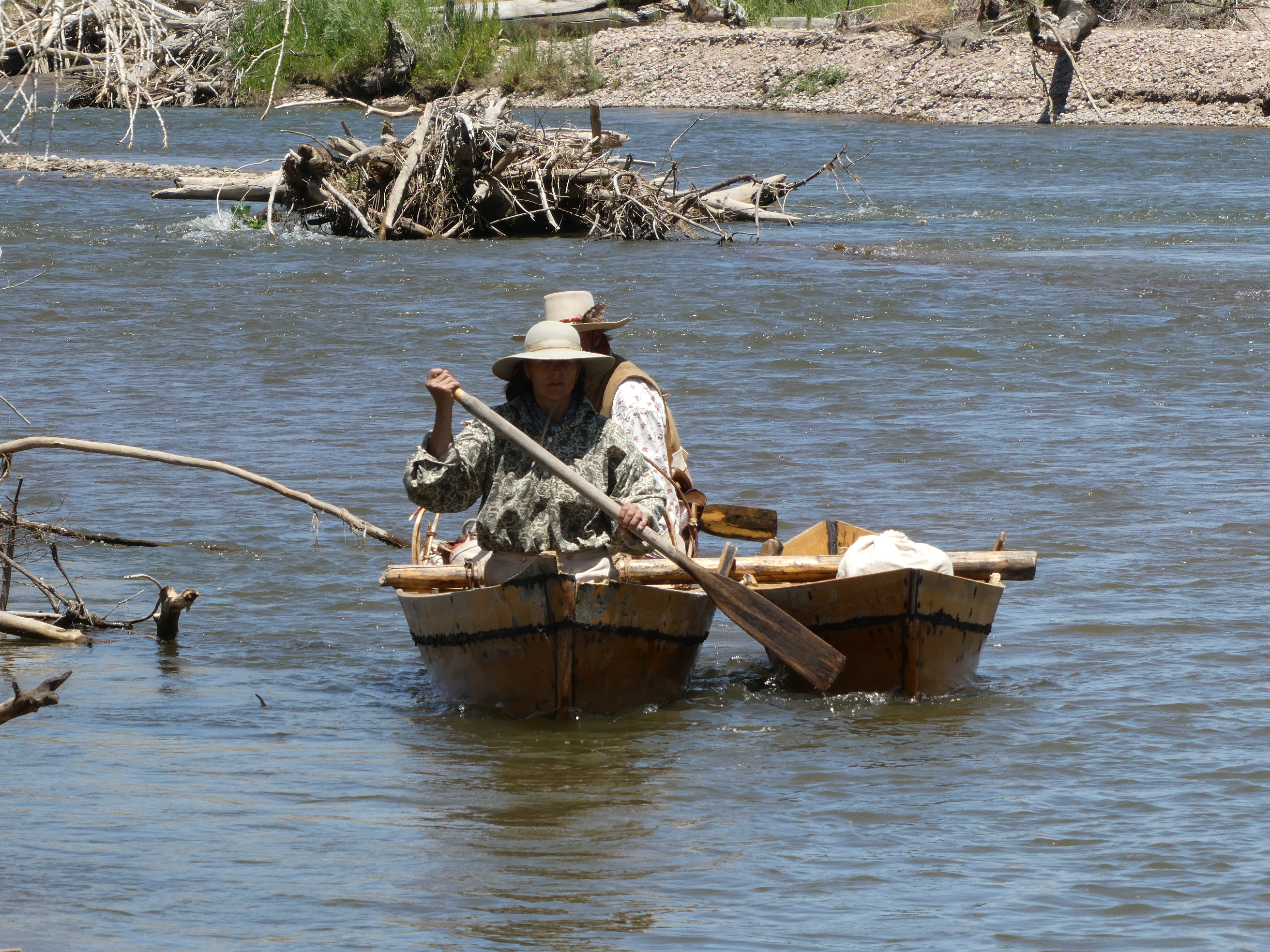 This river has very few calm stretches. It is one riffle after another with a few class II & III rapids thrown in. Prior to launch, we saw a sign warning of the trees, stumps, and other debris that was cluttering the river. There was a lot of debris to be sure. According to a local outfitter, no commercial companies and very few individuals travel this part of the river at this time. The access points are too far apart for most people. We were prepared to camp one night and ended up staying two due to high winds.

A mile and a quarter from the launch we had our first mishap. The river split around an island and there was debris in each channel. Bruce and I elected to take the deeper right channel with the upturned root ball in the center of it. We slipped on by and looked back to see Bill’s boat catch on it. As we got to the island to land, Bill & Lee’s larger boat swamped after the smaller boat hung up in the root ball. By the time we got back upstream to them, they had all of their gear in the smaller of the two boats. We stretched a rope to shore and started transferring gear to the island. After the boats were empty, we started to puzzle on the problem of how to get them off of the snag. Bill untied the lashings but could not get the cross pole to budge. I got my tomahawk and an extra rope and Bill climbed aboard, tied off each boat, and commenced to cutting the wooden reinforcements that were holding the cross pole in place. Once he got that loose, he was able to use the pole as a lever to pry the smaller boat loose and Bruce pulled it to shore. Bill’s larger boat came loose with him in it and full of water started downstream. Thankfully, the current helped me to pull him to the island. After bailing it out with my large brass kettle we got them tied back together and ready to get back on the river. 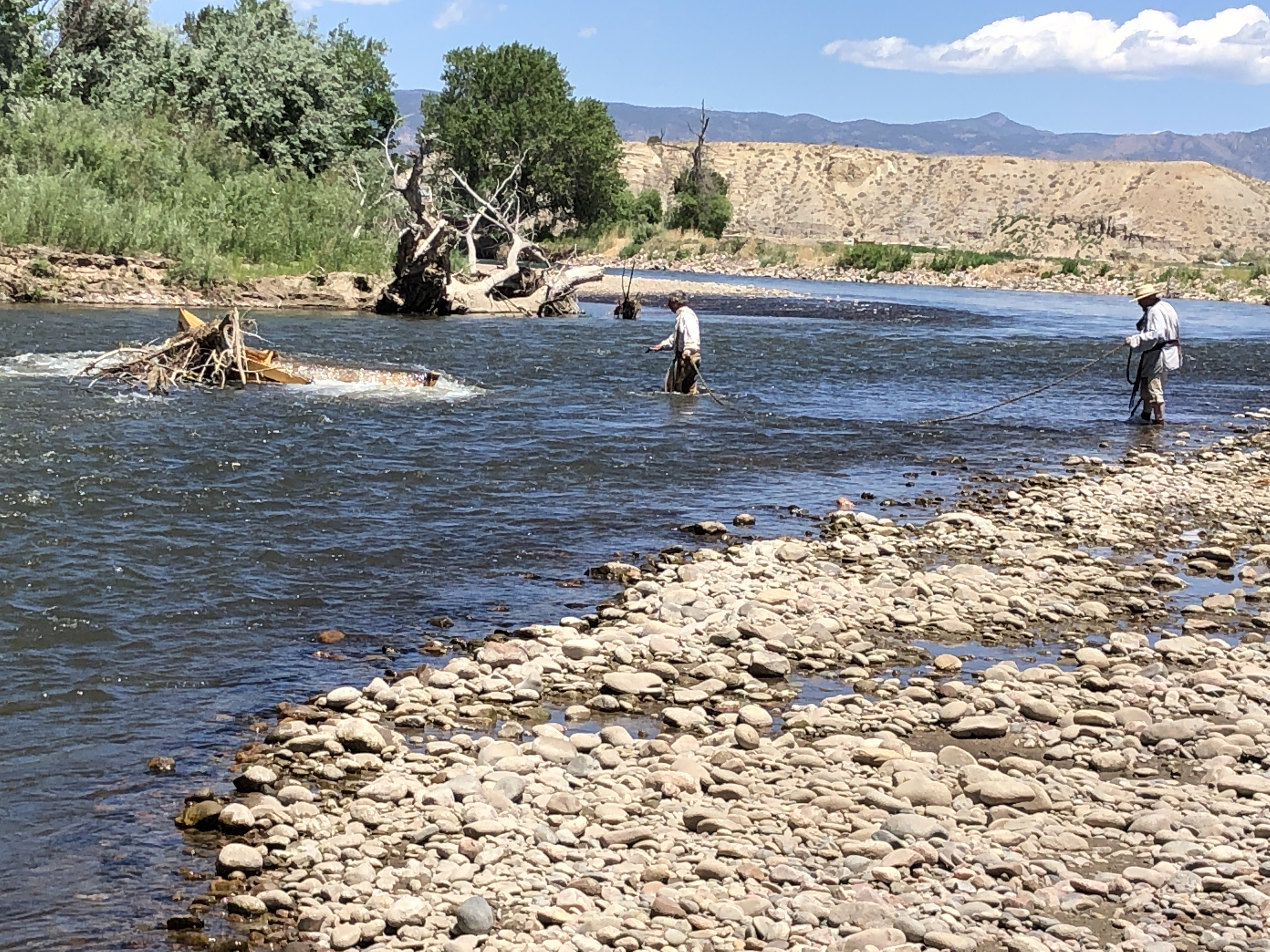 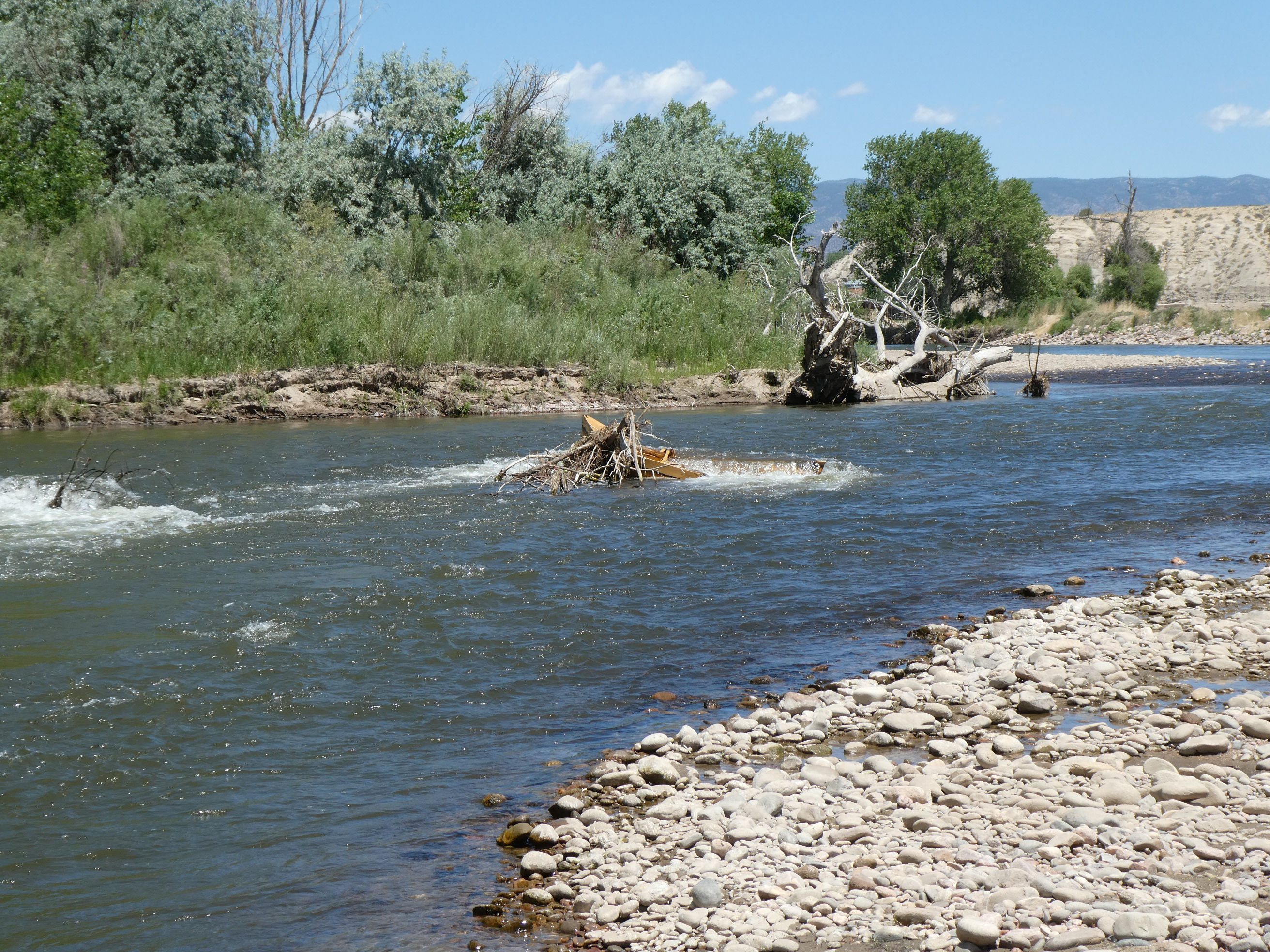 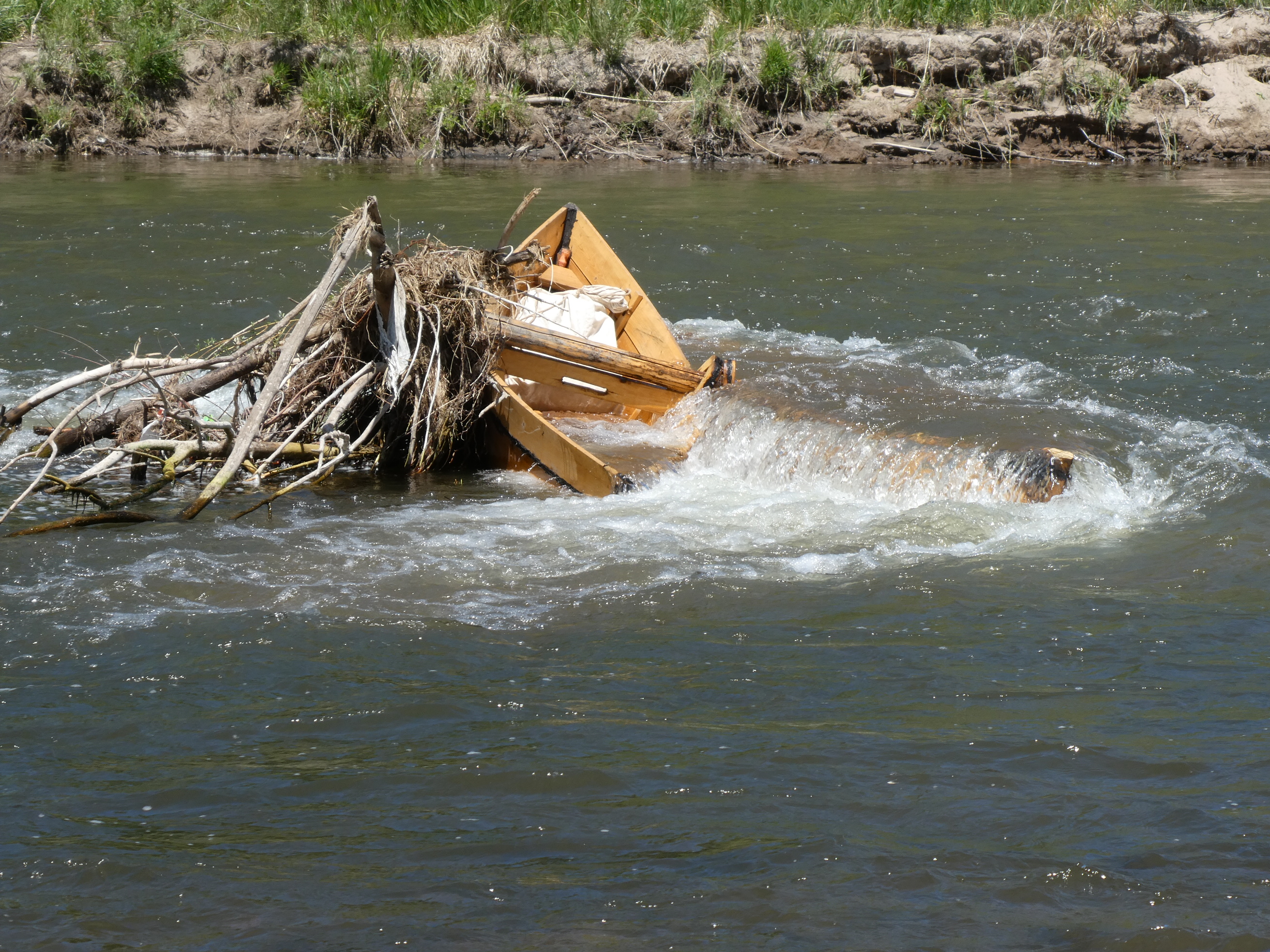 Before re-embarking on the river, Bill trimmed the cross pole so it would not catch on anything. A good thing, as we later proved. We spent almost 3 hours at this, and it was after noon before we resumed our journey. We worked our way downstream to an area of sand bars around Hardscrabble creek. As we negotiated the downed trees (known as strainers) we pulled ashore to portage around a very tight place. Bill and Lee had been swept into a strainer a few second earlier and I was afraid they would swamp and be pulled under. Bill had the presence of mind to step up on the boats to prevent swamping and because he had trimmed his cross bar they bounced off and whirled away downstream. We spent some time hiking around to see if we could get off of the river here as it was proving to be much more difficult than we had expected. We decided to proceed and after portaging the boats and gear around the last tree, we started out again. A few miles down stream we found a gravel bar to camp on. The sun was setting within an hour and we were pretty worn down from all of our adventures on the river.  We saw a lot of wildlife and sign along the river deer, ducks, geese, beaver, turtles, racoon, & elk tracks. 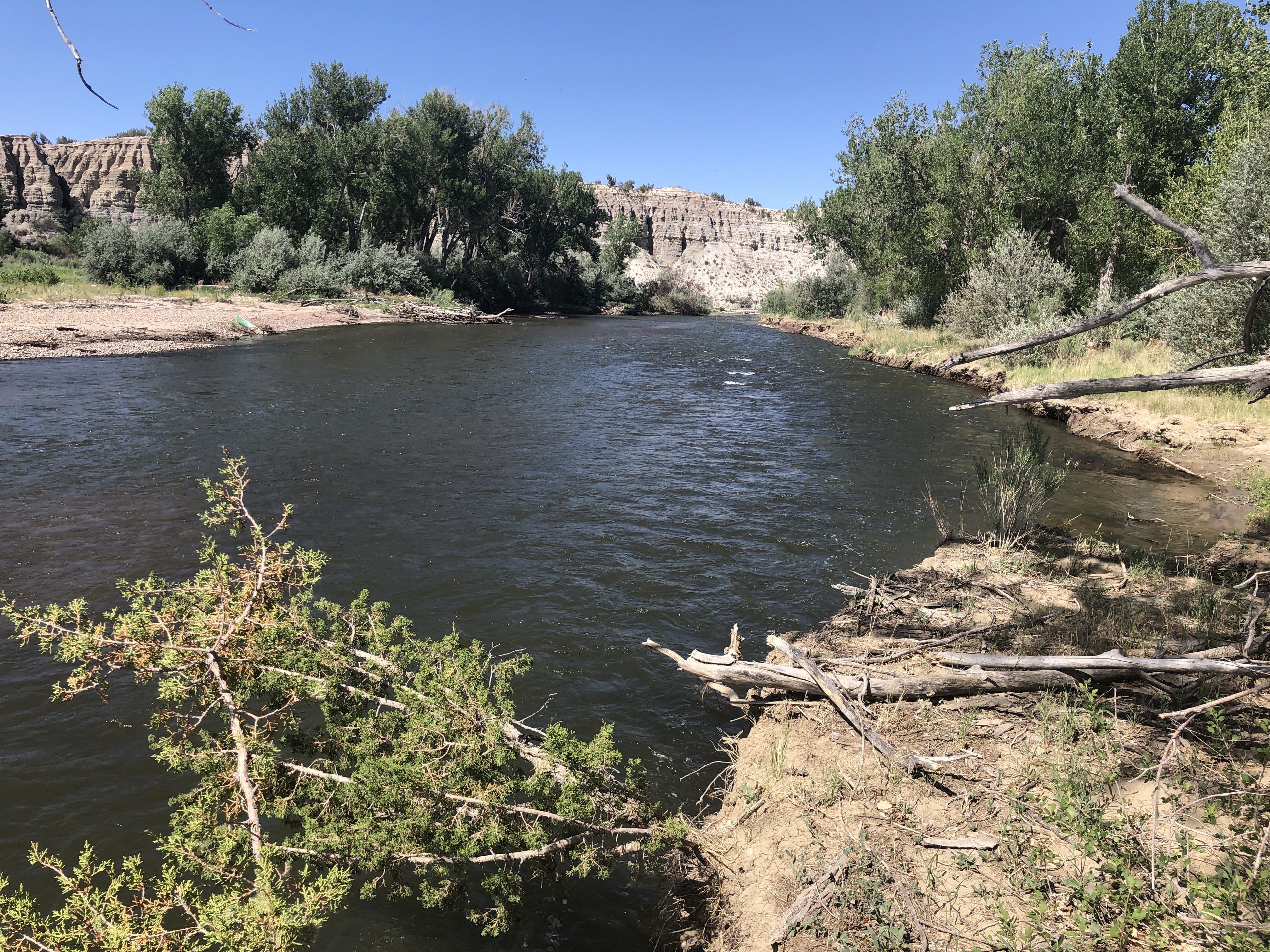 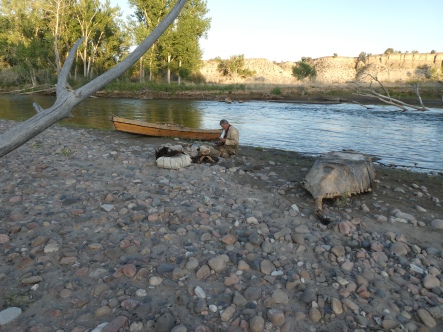 July 1st dawned cool and clear. We rustled up some coffee and broke camp. By my figuring we had travelled less than half way to our planned take out. We paddled down a river that seemed somewhat friendlier. There were fewer trees and other debris. Even the riffles seemed easier. We had a couple of 90˚ turns that gave us cause to pause and consider. We handled both the same way, a frantic crossing of the fastest current and then a leisurely walk down the shallower flow to avoid the fast current and strainers of the outside curves. We lined down several, maybe a dozen of these tree filled riffles and rapids. Going was slow but satisfying. Then we sprung a leak. We pulled up on shore, emptied our boat and commenced to sewing up the hides. After sewing, we applied some more tar and away, we went. 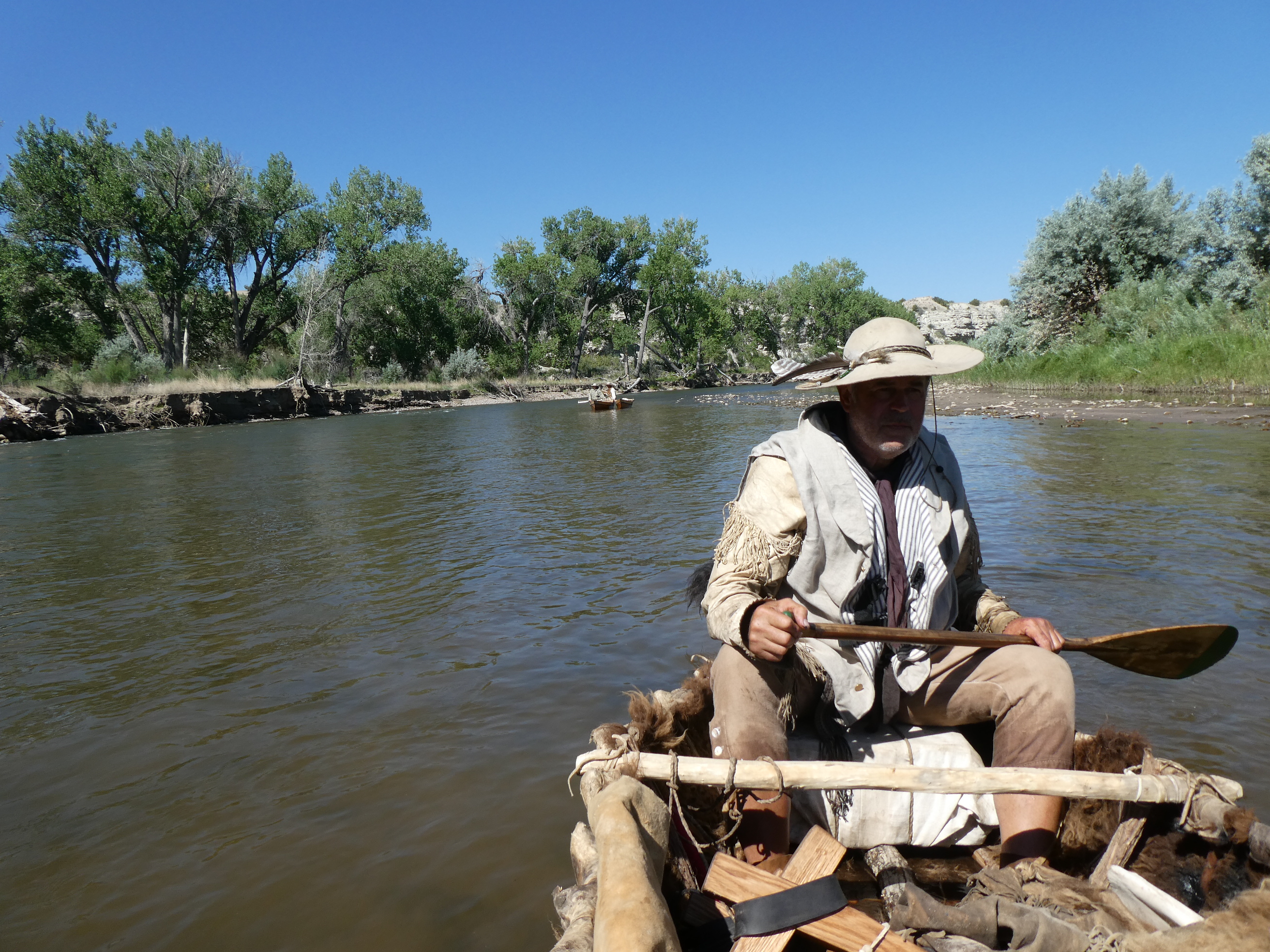 We lost our current as we neared Pueblo reservoir. We also lost our worry about riffles, rapids, and snags. As we neared our desired take out, a place called Swallows, named for an abandoned town, the wind came full in our faces. It was blowing whitecaps at us and we couldn’t gain distance. We pulled up and I attempted to pull the boat along the shore. The wind kept forcing the boat into the shore. As we were trying to tie another rope on the boat, the whitecaps started to fill the back half of the boat with water. We pulled it up on shore and emptied it out to dry. When Bill and Lee caught up to us, I told them we would have to wait it out. Maybe the wind would go down with the sun and we could paddle out at dusk or we could get up early and paddle out in the morning. Bill and Bruce decided to walk to a camp we could see across the bay behind us and see about arranging transportation for our take out. Lee and I set up a quick camp and set out wet gear to dry in the last of the sun and the still stiff winds. I put another coat of tar on the seams of our hide boat. Bruce and Bill were able to catch up with our contact and get our transportation set for the morning. They came back to camp shortly after dark and turned in. 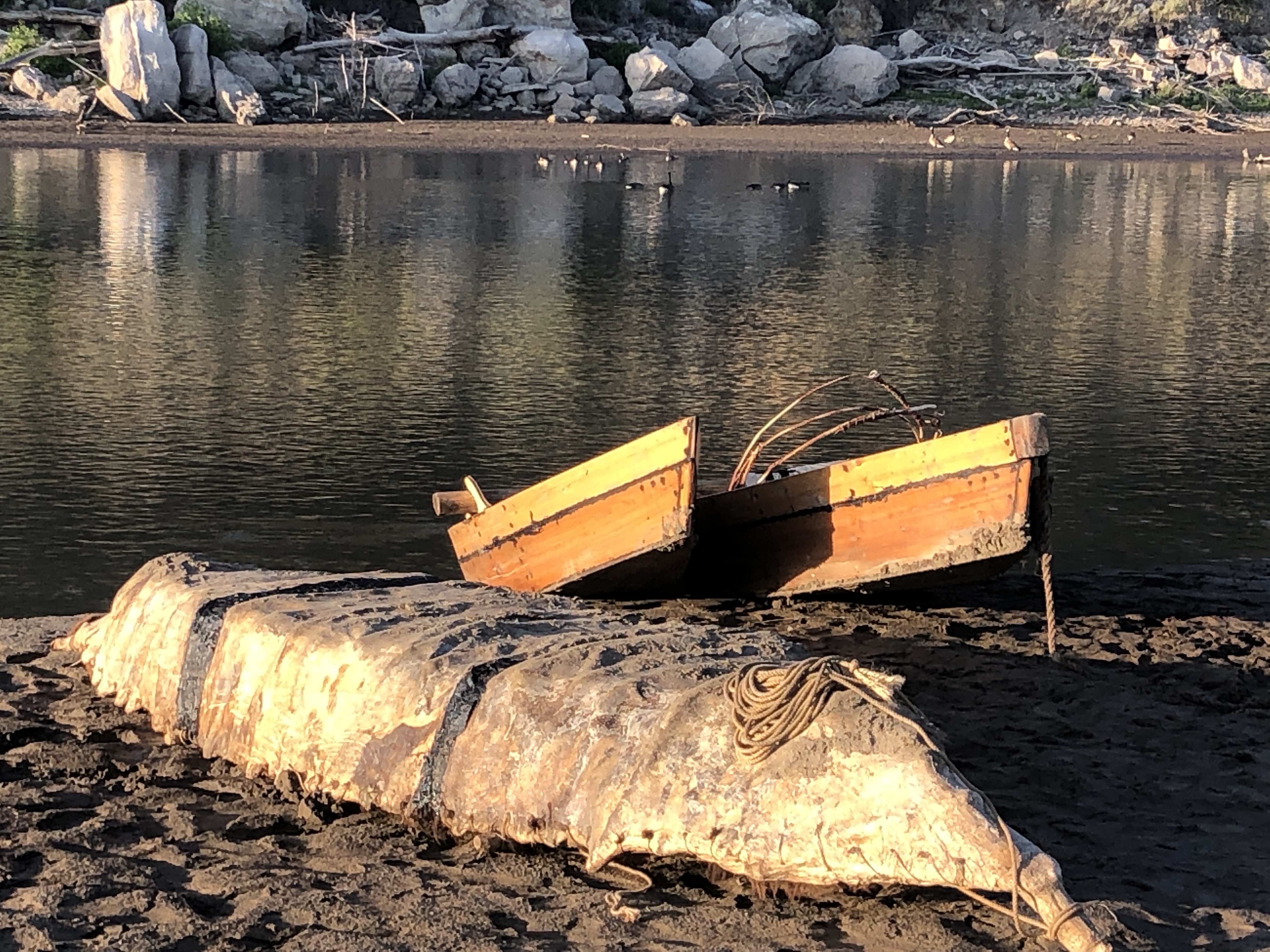 Thursday, July 2 we broke camp and paddled to our take out without issue. This was an adventure in the purest sense. Swamped boats, leaking canoes, wading, lining down rapids, marooned by wind, cold and wet foods, bugs (a few), burning sun, lost maps, etc. It was great!

A while back, my friend and sponsor, Tom Karnuta, introduced me to Edward Abbey.  Although I was familiar with Kirk Douglas’ movie “Lonely are the Brave”, I didn’t realize it was based on Abbey’s story “The Brave Cowboy”.  So I have slowly been exploring the works of Edward Abbey.

Last summer I picked up some books at a garage sale in Minnesota.  Included in the lot was “A Canyon Voyage: The Narrative Of The Second Powell Expedition” by Frederick S. Dellenbaugh.  This is a book I had been looking for as a companion to Powell’s book on his first trip down the Green and Colorado rivers through the Grand Canyon.

As I pursued my new acquisitions, I was surprised to see this book had a nice dedication written inside the cover.  Apparently a woman had purchased the book for her “beloved husband” and had it inscribed “To Benedicto” by Edward Abbey.  The picture below is the inscribed page:

This prose sends a shiver down my spine as I recall my voyages down the mighty Green river through Labyrinth canyon in Utah.  For those of you who know Abbey’s works, I hope you enjoy this little piece of history.  For those of you who don’t know Edward Abbey, I encourage you to join me in exploring his works!