Saturday, November 5, 2016, I met Aaron Griggs and Tom Karnuta in Buena Vista, CO at 6:00 AM and we headed west toward Green River, Utah. We arrived at 11:30 AM in time for lunch at Ray’s Tavern before heading out to Crystal Geyser where I set camp while Tom and Aaron staged my truck and trailer at Mineral Bottom, 64 river miles downstream.

Crystal Geyser as seen from the riverbank. 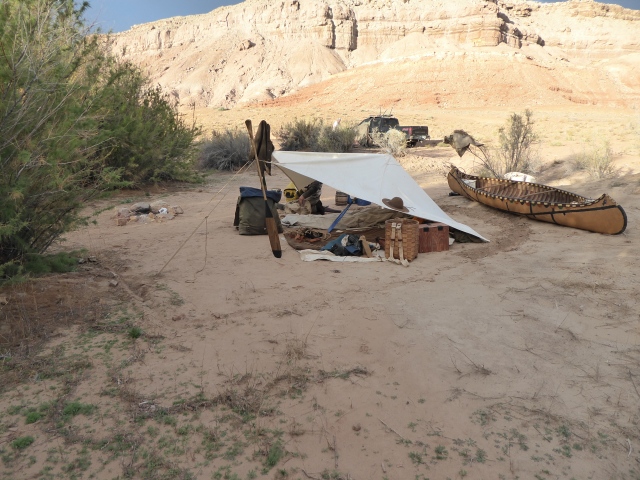 First Camp
Sunday, we launched from Crystal Geyser around 9 AM and paddled past Dellenbaugh Butte to the San Raphael River.

Dellenbaugh Butte
We landed upstream and searched for a campsite. We found nothing conducive to us as canoe campers and so decided to move on down to Dead Cow Wash. We made camp just before dark and cooked our supper after sunset. Twenty-one miles made for a long day on the river, but it was a good day!

Tom in his solo canoe

Landing at Dead Cow Wash
Day 3, we got up after sun-up, made some coffee and packed up. We launched from Dead Cow Wash and paddled the 4 ½ miles to Three Canyon where we landed and set up camp. 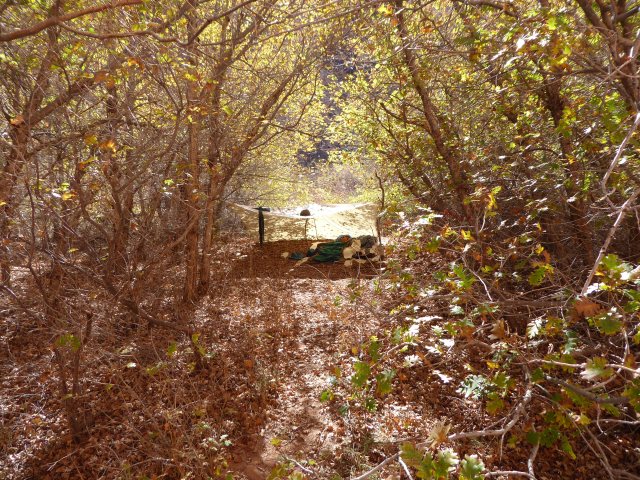 Camp at Three Canyon
My canoe seemed to be leaking a little bit and I needed to wash it off and inspect the bottom. I washed off all the sand and mud and made a careful inspection but I could see nothing glaringly obvious. (After I returned home I found a pinhole through the skin and patched it up with some pine tar.) I made water from the stream with my filter bag, washed out my socks and went for a hike. I hiked and climbed up the first small canyon to the waterfall.

One of the slot Canyons at Three Canyon
When I came back, Tom was making rice. I cooked some deer meat and we ate supper. We talked around the fire until bedtime. We slept warm and well!

Day 4, I heard Tom & Aaron up early. When I got up they were gone. I made water and coffee then walked down to the river where I found the petroglyph again. While I was writing in my journal, Tom came back to camp. I showed him the petroglyph and we found the BLM can with its notebook for those who want to leave their mark today. I left a note about how we were hunting and trapping our way down the Green River. 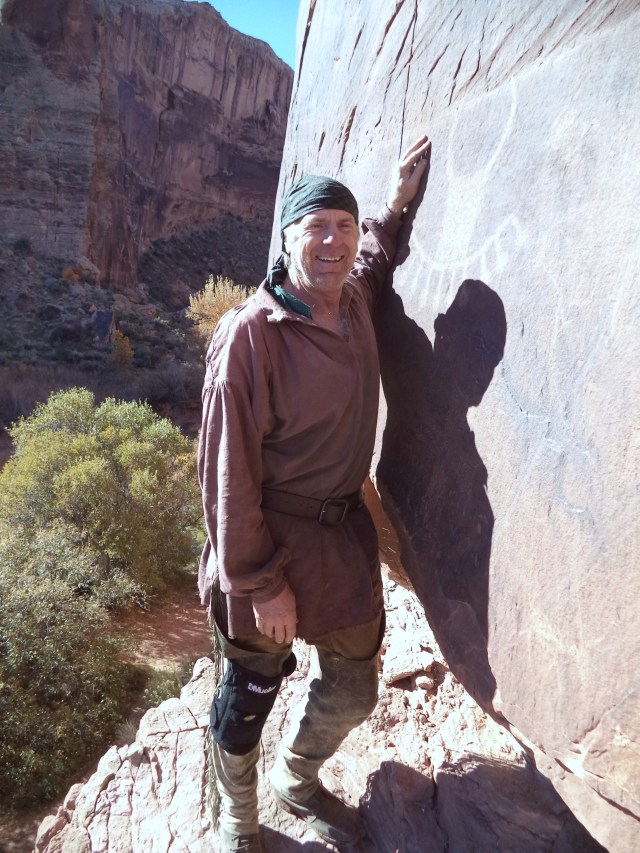 Tom at the petroglyph at Three Canyon

Another slot canyon at Three Canyon

I went up Three Canyon and hiked/climbed up two side canyons as far as I could. According to Thomas Rampton’s book “Labyrinth Canyon River Guide” the slot canyons at Three Canyon are some of the largest remaining slot canyons accessible to us in Utah. The majority of them were inundated by Lake Powell behind the Glen Canyon Dam. Some of these canyons are less than 50 feet wide at the bottom with walls several hundred feet high. I met up with Tom along the way. After we separated, I hunted my way back to camp and spent some time watching the river go by where Tom joined me upon his return. After supper, a fox barked at us from across the creek.

Day 5, Wednesday, Tom & I made coffee and packed up camp while Aaron pulled his traps. Nothing. We paddled 11 miles today down to Keg Spring Canyon. We looked for the petroglyphs noted on our map but found none.

Aaron and I on the river
We landed at Keg Spring canyon to find very little mud and no water in the stream. This was very disappointing for last year there had been abundant clear water flowing and we were counting on finding water here. It was very apparent that there had been a flood earlier in the year for many places were full of sand and other debris. After setting up camp, Aaron and I went up the canyon and found a couple of pools of stagnant water. We filled the filter bag and brought it back to camp. Aaron set a few traps while Tom & I cooked supper. We had a nice night around the fire.

Day 6, after coffee and some breakfast, Aaron went to set some more traps while I hiked up Keg Spring Canyon after Tom. We met up and hiked together for a while. 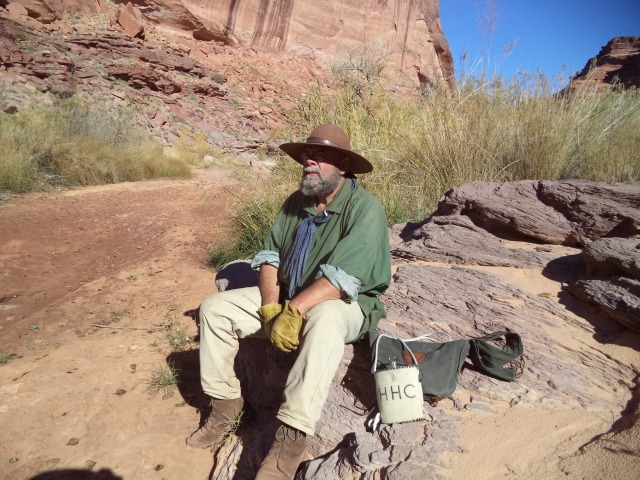 After he turned back, I explored the confluence of the two feeder canyons. I climbed a large slope to a shelf and followed it into the right-hand canyon.

The view from the shelf

After I climbed down, I met up with Aaron and we hiked back toward camp until we met up with Tom at the drinking pool. We filled our water bag & took it back to camp for supper. 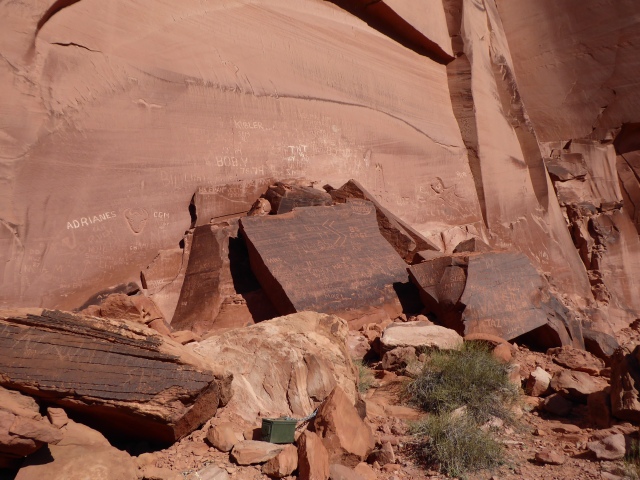 The River Register
Day 7, we paddled 17 ½ miles today. We stopped at the river register and looked for a Denis Julien script from May 16, 1836. Only one of our two maps listed it and it was very vague as to its location. We fought our way through the willows and tamarisk looking for it but to no avail. A branch swept my eye glasses from my face and I spent 10 minutes looking for them before I finally found them hanging on some of the grasses four feet away from me and three feet off the ground. We paddled around the Bowknot bend and made camp at sunset on the same rock shelf as last year. 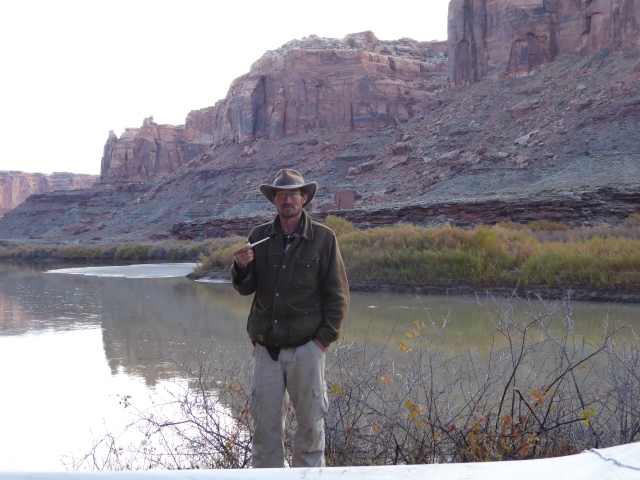 Day 8, after daybreak we did a little shooting and packed up our camp. We paddled 6 miles to Hell Roaring Canyon where we saw Denis Julien’s inscription from May 3, 1836. 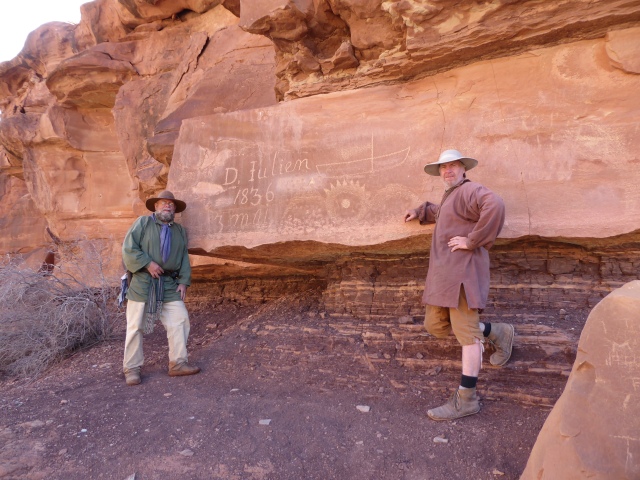 Three more miles of paddling and we were at Mineral Bottom. We left the river at 1:30 PM. This was the first time we had read the time since before we launched 7 days ago! I have never seen a week fly by as fast as it does on the Green River. It seems that one day you are launching your canoe to start a great adventure and the next day the adventure is done and you are on your way home. None of us were ready for the trip to be done and we were all feeling a little melancholy as we drove up the road toward Moab and civilization. We had spent this week without cell phones, internet, twitter, Facebook and didn’t miss it in the least. Just the three of us, the river, and the canyons. We had contact with some people on shore one day and none of us even thought to ask about the outcome of the Presidential election. We truly were living in the moment and nothing outside of the canyons mattered to us at that time.
As can be seen from the pictures we had beautiful weather the entire week. I set up camp at Crystal Geyser in a light shower, but otherwise we had sunshine with highs in the upper 50’s to lower 60’s and we never experienced a frost at night. The moon was waxing and gave us a fantastic night light every evening. 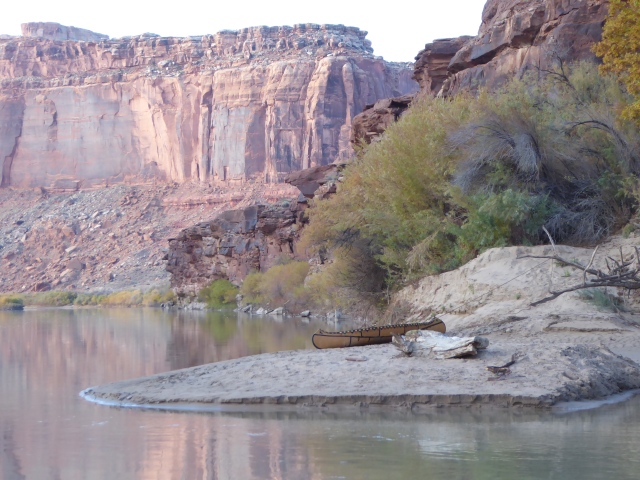 Two Mile Canyon behind the canoe

I am retired from public service, a trained gunsmith, pump mechanic, an old pipeliner, passable electrician, carpenter, truck driver, amateur blacksmith, proof reader, experienced hunter, shooter, reloader, avid canoeist, Renaissance man, jack of all trades, all around good guy (with the caveat: I won't be insulted, lied to or laid a hand on. I don't do these things to other people and I require the same from them.).
View all posts by Gabe the Shootist →
This entry was posted in American Mountain Men, Events, Historical Clothing and Equipment, Hunting & Trapping and tagged canoe, Green River, Hunting, trapping. Bookmark the permalink.