Aux Aliment du Pays – Off the Nourishment of the Land

Requirement #19 of the American Mountain Men states: Must spend three days and two nights totally alone under primitive conditions and aux aliments du pays [“off the nourishment of the land”].  Here is my story about completing this requirement:

Day 1 – I awoke early on November 27, 2015.  It was the Friday after Thanksgiving.  Because of other commitments, this would be my last chance this year for a three day weekend in the woods – aux aliment du pays.  After loading my gear in the wagon and making sure everything was done for Mrs. Hanratty, I headed down the trail to one of my favorite camps. The maps call it East Castle Rock gulch.  I did a solo camp and a hunting camp here in 2012.  Bill Gantic and his Labrador retriever, Molly had joined me for the hunting camp.  We had had some snow overnight and it was still snowing when I arrived at my campsite.  I cleared away 5″ of snow and set up my small wedge tent.  After setting camp, I went for an afternoon hunt.  As often happens when it is snowing the animals take shelter and there is little movement in the woods.  I saw a few rabbit and squirrel tracks under the spruce trees where the snow had not built up yet.  I spent an hour or two in the evening reading and writing the story of the six day trip I had just completed down the Green River in Utah.  I had a pretty cold night and it continued to snow.

Day 2 – I awoke to sunshine and a warmer morning than yesterday. 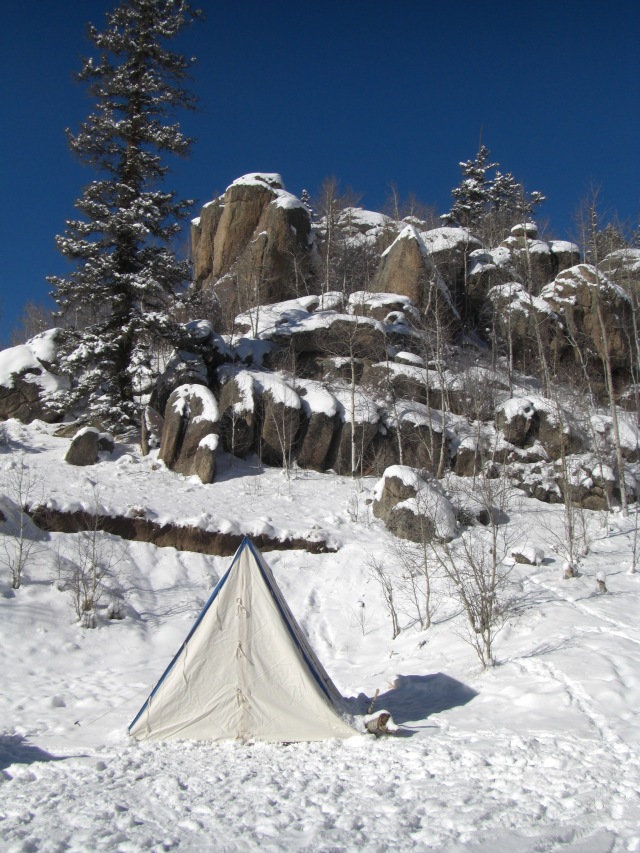 There was a new 3″ of snow on top of what was on the ground when I turned in. I grabbed my smoothbore and went out to find some breakfast.  I found some deer and coyote tracks in the fresh snow and a few cottontail tracks under another spruce.   I visited the campsite I had used twice in 2012.  The wind was blowing mildly and there was small snow clumps falling from the trees.  I wasn’t able to scare up anything to eat.  I could find no new rabbit or squirrel tracks this morning.  Water, however was not a problem.  Some of the shady areas had over a foot of good clean snow.  The springs I had dug out in 2012 were frozen over and the marshy areas had ice flows frozen across them but the little spring near camp must be somewhat warmer because it had a good strong flow. 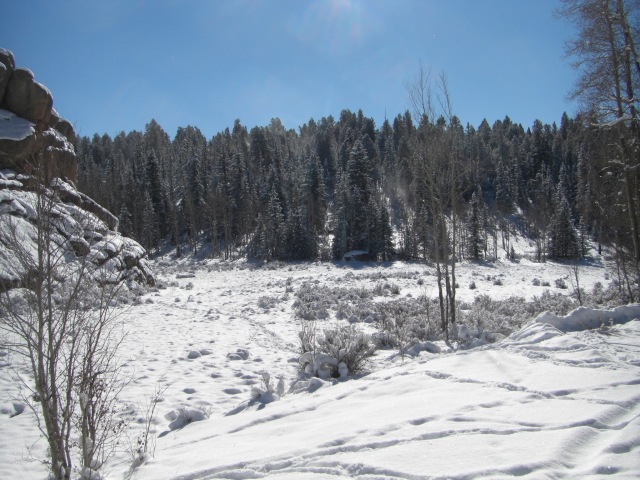 During the midday, I enjoyed the warm sunshine and continued to work on my Green river story. The wind continued to blow and the clumps of snow continued to fall from the trees.  There is still a lot of snow in the trees yet to come down.  As the sun started to tilt to the west, I went out for the afternoon hunt.  I still could not find any rabbits or squirrels to make a meal from.  Although I hadn’t eaten anything since early Friday, I wasn’t hungry.  I had consumed a lot of water during my time in the woods and that seemed to quell my hunger very well.  I was having a problem with my CPAP equipment the night before and my dog Cole was hurting pretty badly and I could tell he wasn’t looking forward to another cold night in the tent. I decided to pack it in and head home. In the late afternoon sun, I broke camp and headed home to hang my canvas, catch up on my notes and plan my next venture.

On Saturday January 16, 2016, I left home first thing in the morning headed for an area known as the Apishapa Wildlife Management Area.  On the way in, I saw a roadrunner and some prairie dogs.  The weather was clear and the temperature had climbed to 42 degrees under the winter sun.  When I arrived, I scouted several trails and found myself a place to camp on the south side of a large gully among the western red cedars and Ponderosa pines.  There is water in the Apishapa River down in the gully. There is a lot of ice but the water is still accessible.  I am east of the Spanish Peaks and Walsenburg, south-east of Greenhorn Mountain and to the north I can see a snow covered peak which is Pike’s Peak.  I set up my lean-to and gathered some rocks to make a Blanchard fire pit.  I gathered up enough firewood to last the night and laid out my bedroll. 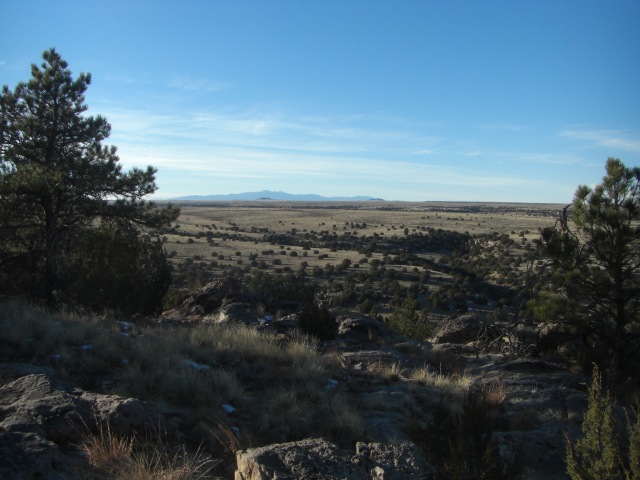 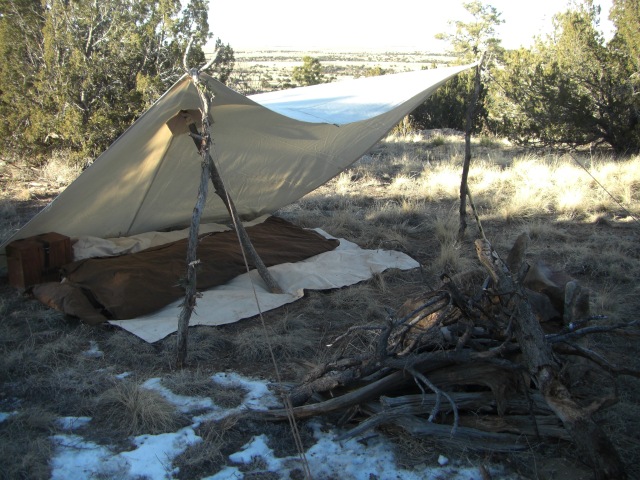 As the afternoon wore on, I took my shotgun and dogs for a hunt.  We got into an area of brush & cedars where we started to see cottontail rabbits.  At one point the rabbits seemed to be everywhere at once.  Between me & the three dogs we had those bunnies steppin’ & fetchin’ like their heads were on fire and their asses were catchin’.  I shot at one running but didn’t get my cheek down on the stock and so I shot too high and missed.  A little later, I jumped another one and he ran under a cedar which was choked with brush around the trunk.  As I circled the tree, I saw it sitting near the trunk in the brush.  I put the bead of my shotgun just off of the end of his nose and pulled the trigger.  He went down in a heap.  I pulled him out of the brush and let the dogs admire it while I reloaded.  We didn’t see any more game on our way back to camp.  When we arrived at camp, I cleaned my prize and set it out to cool until tomorrow when I will cook it.  There is more to eat here than just animals. The Cane cholla fruit and the prickly pear cactus. Wikipedia says of the Cholla fruit: “The fruits are yellowish, tubercular like the stems, and shaped something like the frustum of a cone, with a hollow at the wide end where the flower fell off; they are often mistaken for flowers. The plant retains them all winter. They are dry and not tasty, though the  of Arizona and New Mexico are said to have eaten them.”   The prickly pear can be singed of its needles and cooked or eaten raw (I have eaten prickly pear at Bent’s Old Fort).  I had plenty of bunnies and so did not need to resort to eating these plants. I spent a quiet evening in camp before I turned in just before 9:00 PM.  The temperature at bedtime was 30 degrees with a stiff wind from the SSW which made it feel much colder.  I rigged an extra bit of canvas over the end of my lean-to in hopes it would block the wind enough so I could sleep.

Day 2 – I awoke at sunrise rolled over and went back to sleep.  It sure is a good feeling knowing you have meat in the larder.  I woke up again at 9:00 AM, it was 28 degrees.  I got up and grabbed my shotgun and headed out in search of more meat.  Just east of camp the dogs jumped a rabbit and as it circled back I took a shot at it and didn’t lead it enough and so I missed again.  I reloaded and we saw another bunny but I didn’t get a shot.  A little farther along, I saw one that the dogs didn’t see.  I circle the trees where I saw it disappear and pushed it out.  It did not get away.  Back in camp, I cleaned and cooked both rabbits on my meat hook from the tripod I made. 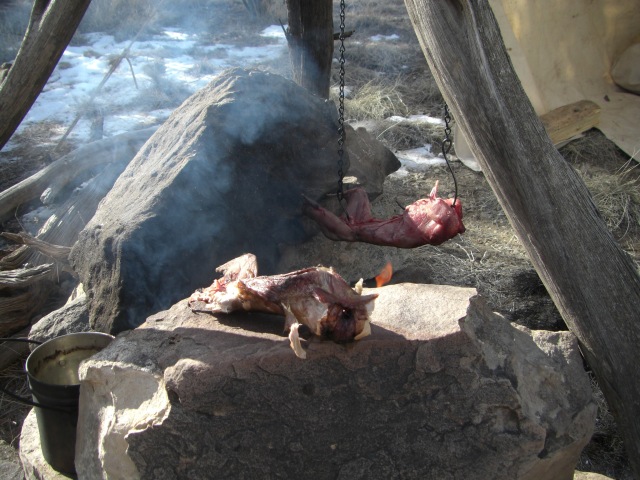 The sun came out as the clouds moved off and the temperature warmed into the upper 30’s.   For this hunt I am using my sawed-off double barreled 20 gauge percussion shotgun.  I have fired the right barrel 4 times and the left barrel is still in reserve.  The country here is supposed to hold quail as well as rabbits, deer, antelope, Big Horn sheep and coyotes.  I haven’t seen any birds or sign of them as yet.  The prairie is grass covered with many cholla plants and prickly pear cactus.  The edges and gullies are sparsely covered with cedar trees and the occasional Ponderosa pine.

Day 3 – January 18, 2016.  It warmed up overnight and the wind picked up a little.  When I got up I started packing up my camp stuff and rolled up my blankets.  We went out for a three mile scout.  We ate our second rabbit before we left and decided not to shoot anymore along the way.  I had heard there were quail out here and so I decided to focus on getting a few birds. I did not see any quail while we were out today.  We headed home late in the afternoon when the temperature had reached 55°.  It was hard to leave with the weather this nice! 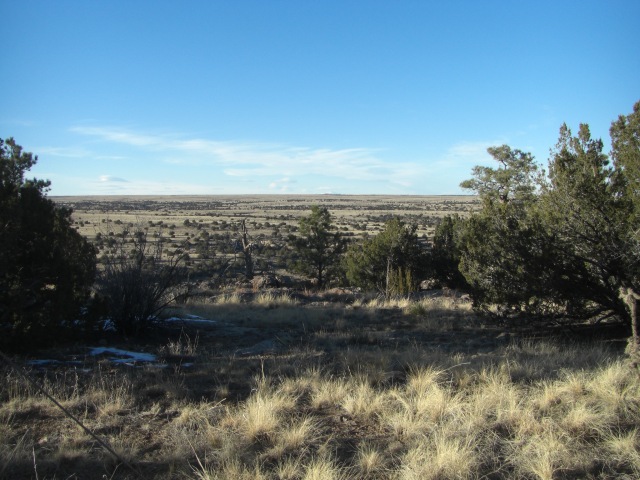 I am retired from public service, a trained gunsmith, pump mechanic, an old pipeliner, passable electrician, carpenter, truck driver, amateur blacksmith, proof reader, experienced hunter, shooter, reloader, avid canoeist, Renaissance man, jack of all trades, all around good guy (with the caveat: I won't be insulted, lied to or laid a hand on. I don't do these things to other people and I require the same from them.).
View all posts by Gabe the Shootist →
This entry was posted in American Mountain Men, Events, Historical Clothing and Equipment, Hunting & Trapping, Shooting and tagged AMM, Bent's Old Fort, firearms, Flint & Steel, fur trade, guns, Hunting, Mountain Man, mountain men, muzzleloader, shooting. Bookmark the permalink.